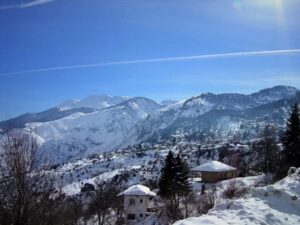 Nestled on the slopes of Zireia, in a dense fir forest, and at an altitude of 900 to 1,100 meters are the three districts of Trikala, at the prefecture of Corinth, in Peloponnese. Kato, Mesaia and Ano Trikala (Lower, Middle and Upper Trikala) comprising a designated destination for the mountain escapes. The destination is connected with winter activities at the snowy slopes, although all seasons have a special beauty which attracts visitors. 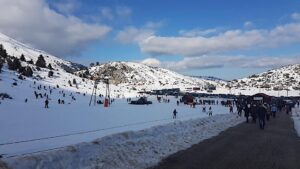 At a distance of 12 km from the settlements and at an altitude of 1500m. is located the Ski Center of Zireia. Trikala, in winter has a special beauty, when “wrapped” with the veil of snow. Beauty, when “wrapped” with the veil of snow. Trikala, (synonym with Trikala in central Greece) is just 24 km outside Xylokastro, a summer resort at the Gulf of Corinth. Each of the districts has certain unmistakable characteristics. A stone-built square with centuries-old platanus (plane) trees dominates Kato Trikala, while the middle district is dominated by the traditional Greek elements, including tourist infrastructure with hostels, hotels, restaurants and cafes. Here, it is worth seeing the Monastery of Panagia, built around 1700.

Churches dated back to 16th century and stone mansions are the characteristic of Ano Trikala. Here, is the historic monastery of Agios Vlasios, where according to tradition, the miraculous icon of the Saint was found in a cave around 1400. In Ano Trikala is the mansion of Notarades, an aristocratic family dated back to Byzantine times.
Hiking the Zireia Mountain area in the summertime provides breathtaking views and is another reason visiting the area year round. 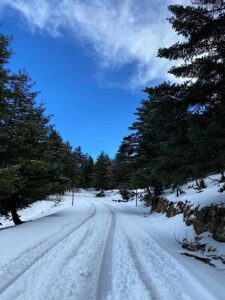 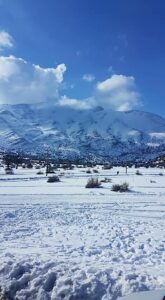 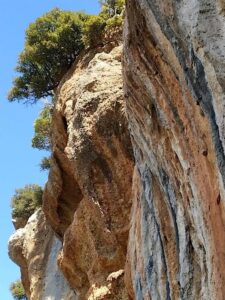