Yes I Have Ghosts Gilmour in Hydra 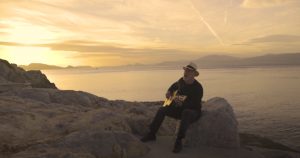 The inspiration for the track ‘Yes, I Have Ghosts’ was the new novel ‘A Theatre for Dreamers’, by Polly Samson, set on the idyllic Greek island of Hydra in 1960. The song was previously only been available as part of the ground-breaking audiobook for the novel. Samson also wrote the lyrics of the song.

‘A Theatre for Dreamers‘ novel captures the hazy, sun-drenched island days of an expat bohemian community of artists, poets, painters, and musicians, including a 25 year-old at the time Leonard Cohen who had his eyes set on his beloved Marianne. The Greek island of Hydra, attracts bohemian life and barefoot types coming in from all four corners of the globe, living in a tangled bohemian Hydra island utopia.

‘Yes, I Have Ghosts’ released on July 3rd, 2020 and published by Pink Floyd Music Publishers Ltd.

Watch below the video.  Best to click bottom right [ ] and view in full screen