Walking to work in Athens

Today the public transport in Athens was on strike so I had to walk to go to work.

I passed by the columns-temple of Olympian Zeus to feel insignificant in front of its size. It is the largest ancient Temple in Greece of Hellenistic and Roman times, the construction of which began in the 6th century B.C. and was completed from the 2nd century A.D. by the emperor Hadrian, a great admirer of the ancient Greek spirit.
His view made me think that at that time art was the result of education by creators with inner culture, and that is why beauty of the artifacts has the seal of perfection of measure. That is in contrast to contemporary art which is often an expression of social or individual impasses.

Almost next to me, on the sidewalk, the Greco-Roman baths that were uncovered during the construction of the metro came in front of my eyes. The existence of the baths has to do with the promotion of the area with the completion of the temple of Zeus.

I passed outside the Royal Garden where the busts of the three most famous tragic poets of antiquity (Aeschylus, Sophocles, Euripides) seemed like they were looking after me. 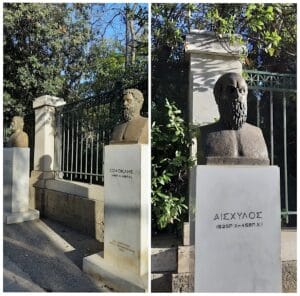 Just inside, the other side of the gates, the statue of Satyrus was looking at me. He was the one, who as a follower of the god Dionysus caused in my mind the morning good mood.

The neoclassical majestic building complex of the National Kapodistrian University is riveting you to admire it. The gaze clings to its roof on the statue of Athena, the goddess of Wisdom and craftsmanship, protector of the city,  and Apollo, the god of light, arts and divination, through the orange trees, loaded with fruits. 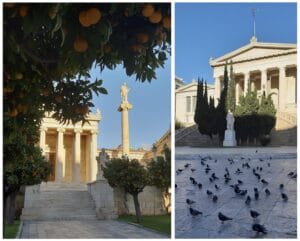 Just a blessing living in Athens and enjoy the morning, surrounded by history and beauty while walking going to work.
Athens is one of the oldest and most beautiful cities in the world. I’ll take this walking opportunity any day! 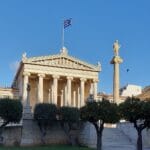 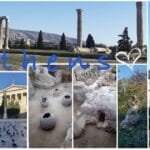 Our Beloved Athens – Walking to work

Credit: Article and Photos by Maria Manavi, contributor to IAmGreece.org