In most of my walks in the area of ​​Plaka-Monastiraki I will pass to admire the Gate of Athena Archegetis (Chief Leader) situated west side of the Roman Agora, in Athens and considered to be the second most prominent remain in the site after the Tower of the Winds.

In ancient times it was the western main entrance of the Agora (market place) of Athens, at the junction of today’s Areos, Poikilos and Dioskouron streets. The Roman Agora was the commercial center of the city during the Roman period.

After the conquest of Athens by the Romans (86 BC) Julius Caesar funded the new commercial market, as Athens’ needs for a larger commercial space was expanding. Subsequently, the construction began and was completed by Emperor Octavian Augustus in the second decade of BC. (19-11).
In the context of the market, the Gate was built, which was dedicated by the Municipality of Athens in honor of the goddess Athena, the “leader of the city”. 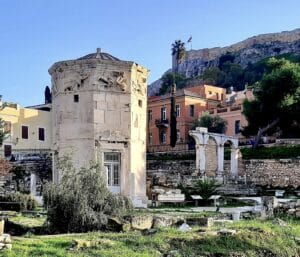 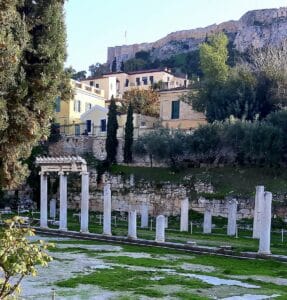