The Trip To Greece 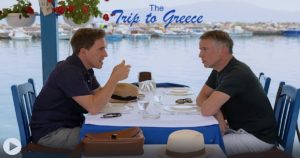 While the international travel is close to impossible, The Trip to Greece is just what Hippocrates ordered, writes the NYT.

Some parts of the movie, especially the beginning about refugee camps is not appropriate to say the least. Steve and Rob keep chatting amongst themselves with little or no attention as to identify where they are or having any discussion about the Greek culture. Good to see parts of Greece but you really need to know of the places, otherwise one does not know where exactly they are. So, overall we have mixed signals about the film.

The movie was made available to watch online internationally around the world on Friday, May 22, a few months after it premiered in the U.K.

When Odysseus left Troy it took him ten years to get back to his home in Ithaca. Steve and Rob have only six days on their own personal odyssey in THE TRIP TO GREECE.

On the way they argue about all the things Greece and the Greeks are credited for – tragedy and comedy, astronomy and biology, myth, history, democracy and the meaning of life!

Featuring locations include: Temple of Apollo at Delphi, the Ancient Agora of Athens, the Ancient Theatre of Epidaurus, the unique island of Hydra, the Caves of Diros, Nestor’s Palace, Niokastro Fortress in Pylos, and Ancient Stagira, as well as a lot of shooting in restaurants and hotels in Athens, Hydra, Lesvos, Chalkidiki, Pelion, Kavala, and at the Peloponnese.

Here is the official movie trailer. [click on the square on bottom right for full screen view]

The movie is streaming on various Internet channels.