The church with no roof 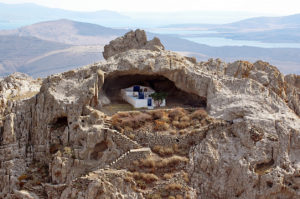 At the top of Mount Kakavos in Lemnos (elevation 260m), in the northern the Aegean Sea, is a picturesque church, perhaps the only one in the world for its architecture. That is, the church has no roof as it is built in a large cavity of rocks in a cave-like setting at the very top top of the mountain.

It is dedicated to Panagia (virgin Mary) and from the mountain Kakakovo it was named “Panagia Kakaviotissa“. The church belongs to the parish of the village Thanos and is located between Thanos and the beach of Zemata. 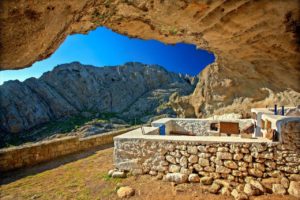 According to tradition, this place was chosen by monks who belonged to the Monastery of the Great Lavra of Mount Athos, they came from Agios Efstratios to protect themselves from the attacks of the Turks. This impressive church was built here, estimated at 1300 used to be a shelter for monks and hermits. In the area, fields that were cultivated at the time can still be seen.

Metochi has been mentioned in documents of the Monastery of Megisti Lavra since 1300 as its property. Also, according to the census of 1356, when the commander of Lemnos was Manuel Laskaris, he is mentioned as a Metochi of the Monastery of the Great Lavra and before and after the fall of Constantinople. (Sathas, Medieval Library, volume C, p. 568). 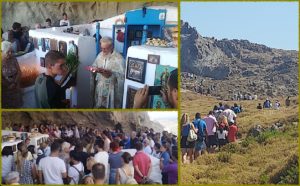 Today, many travelers and pilgrims visit the area. Access to the chapel is initially by 10 minute car ride from car Myrina and then a 45 minute hiking on a path to the top of the mountain.