The statue of Ariadne – a reminder of a sad story.

An unfinished marble statue of a naked female catches the eye on the causeway leading to Portara, the ancient 6th BC temple of Apollo, in the port of Naxos. The finished part is smooth marble in contrast to rough chisel marks of the unfinished parts of the sculpture.

One has to wonder, why the statue is there and why unfinished! Mythology has multiple answers to this question.

Princess Ariadne, was a daughter of Pasiphae and the Cretan king Minos. She fell in love with the Athenian hero Theseus who had sailed from Athens to fight the Minotaur, a beast half bull and half man, who was Ariadne’s half brother. Theseus made his way into the labyrinth with Adriane’s help by unwinding Ariadne’s ball of thread, so he can find his way back out after confronting the Minotaur.

After killing the Minotaur, Theseus left Crete with Ariadne, and on the way back to Athens they stopped at the island of Naxos. Theseus and Ariadne slept together on the island that night, however he broke his promise to marry her. 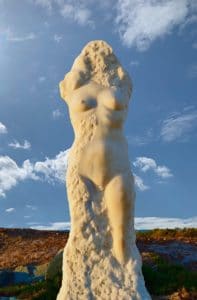 There are different versions of what happened (indicating multiple symbolic meanings).

One version is that Theseus got tired of Ariadne as he had achieved his mission, for slaying the Minotaur. While Ariadne was sleeping, he sailed off and left her in Naxos. When she woke up, she found herself alone deserted on the island and she was devastated. She decided to end her life, after realizing that Theseus had abandoned her, throwing herself from the highest point of Palatia hill, where Portara is located.

Another story is that she did not die. God Dionysus was passing by in the midst of his travels, he saw Ariadne and he was overwhelmed by her beauty. He immediately married her and she became a goddess, ascended to Mount Olympus.
Ariadne had several children, two of the sons by Dionysus (or Theseus by other accounts), Staphylus and Oenopion, both names associated with grapes and wine. So, everything turned out well for Ariadne, but not so good for Theseus.

We have to remember that Theseus’s ship had two sails, one white and one black, to choose and use for his return to Athens. Theseus, preoccupied with guilt over his bad treatment of Ariadne or for other reasons, he forgot to change the sails on his ships from black to white. So when his father king Aegeus, watching for the return of his ship off the coast of the Athenian peninsula, saw the black sails, he thought his son had died. He threw himself into the sea, thus named Aegean sea after him. Theseus arrived home to Athens in triumph, but he found his city in mourning for the death of the king.

If you travel to the island of Naxos today, you will see a statue of Ariadne, looking out to shore.

You are helping us by using this link when buying from Amazon. Thank You!