The Petrified Forest of Lesvos, located on the island of Lesvos, Greece, in the northern Aegean region is one of the most important natural heritage monuments in the world, and a unique testament to the ecosystem that once existed in the Aegean region during the Miocene Epoch.

The petrified forest was formed from the fossilized remains of plants on the western part of the island. The area has been designated as a protected natural monument and managed by the Natural History Museum of the Lesvos Petrified Forest.

The importance of the area triggered the establishment of The Natural History Museum of the Lesvos Petrified Forest, a geological museum located in the village of Sigri on the island of Lesbos in Greece. Established in 1994, it is a center for the study, management, and preservation of the petrified forest of Lesbos and for public education about the site, in order to study, research, promote, preserve and protect this invaluable “testimonial” of life in the distant past. The nearby villages of Eressos, Antissa and Sigri are very dense in fossilized tree trunks.

In December 2019, a fossilized tree was found during road-work near the ancient petrified forest area. The tree, about 19 metres long, was preserved by a thick layer of volcanic ash after it fell. A large number of fruit tree leaves were found in the same spot, adding to the picture along with animal bones from the general area. This is the first time a tree has been found in such good condition complete with branches and roots since general excavations began in 1995, said Professor Nikos Zouros of the Museum of Natural History of the Petrified Forest of Lesbos.

A few months earlier, in August, 2019, two gigantic petrified tree trunks, lying one on top of one another, were discovered in the Lesvos Island during salvage excavations conducted by the Petrified Forest Natural History Museum of Lesvos in cooperation with PPC Renewables.The 21- and 23-metre-long trunks are of coniferous trees and the largest found anywhere in the area of Lesvos’ petrified forest.

According to museum director and University of Aegean professor Nikos Zouros, the trees “are probably ancestral forms of sequoia trees, and further research will confirm the details of their identity”.
Professor Zouros added that “the finds are spectacular, as they reveal the ferocity of the volcanic eruptions that took place around 20 million years ago in the region that is Lesvos today. The gigantic trees were uprooted and swept away by huge mudflows of volcanic materials, resulting in one ending up on top of the other where they were found.” 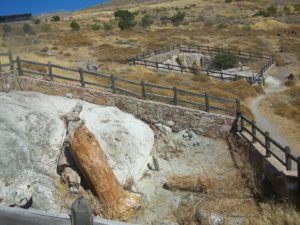 The salvage excavation was completed in order for PPC Renewables to replace nine outdated wind turbines with three new ones. Several petrified objects were found in the areas where the foundations were laid and “treated according to scientific methods, and transferred to the museum,” Zouros said. Findings near one of the wind turbines will be left in place and eventually be shown to the public. Four much smaller tree trunks were also found, which will be preserved. All discoveries were made at a site adjacent to an existing protected area with petrified trunks.

The year 2000 marked the establishment of the European Geopark Network, its objective being the cooperation of geologic parks and monuments at a European level for the development of geotourism. The Natural History Museum of the Lesvos Petrified Forest is a founding member of this network.

The Natural History Museum of the Lesvos Petrified Forest

In 2001, the museum was awarded the Eurosite Management Award for its effective management of the Lesvos Petrified Forest. In February of 2004, the Petrified Forest of Lesvos was inducted into the Global Geopark Network of UNESCO.

The first references to the fossils of Lesvos can be found in Theophrastus’ works. Theophrastus of Eressos, who was born was born circa 371 BC in the area of the Petrified Forest of Lesvos, was one of the greatest thinkers, scientists and philosophers of antiquity and the first scientist to consider fossils, to which he devoted special attention.

It should also be noted that thousands of visitors and students flock to the area annually in order to admire and study the petrified forest through organized visits, to participate in special events and educational programs, and to see temporary exhibitions and activities.