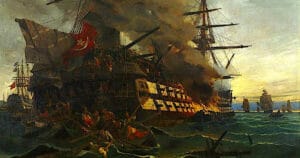 The burning of the Ottoman Two-decker at Eressos, painting by Konstantinos Volanakis

On 8 June [O.S. 27 May] 1821 the heroic fisherman Dimitris Papanikolis, used a fireship and destroyed an Ottoman two-deck frigate which was anchored at the Eressos harbor in Lesbos island.
His action led to the generalized use of fireships by the Greeks, who were thus able to even the balance with the far more powerful Ottoman Navy.

Papanikolis was a naval hero of the Greek Revolution, famous for being the first to successfully employ a fireship to destroy an Ottoman ship of the line{1]. A fireship, used in the days of wooden rowed or sailing ships, was a ship filled with combustibles, or gunpowder deliberately set on fire and steered into an enemy ship or fleet, in order to destroy ships, or to create panic and make the enemy break formation.
Sources: Wikipedia | [1]