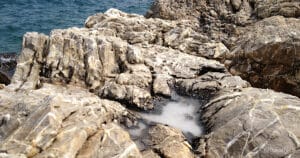 Mediterranean sea is very salty unlike the Atlantic ocean, and one can find and harvest plenty of sea salt around rocky shorelines. In fact table sea salt mainly is made in the Mediterranean.
Sea salt is used in Greek cooking, preferably in coarse crystals form. According to American Heart Association a spoon of sea salt contains less sodium than mined table salt, simply on the fact that fewer crystals fit on the spoon.
Picture is taken near the pier at Paralio Astros, Peloponnese, after a storm whereas puddles of sea water evaporate leaving sea salt on the rocks
Note: Before harvesting seawater, be sure the sea area you are using is not polluted. That is, if it is safe for swimming & fishing, it should be fine for sea salt. Stay harvesting near ports and dock areas where boats are moored.