Greek PM with Tom and Rita 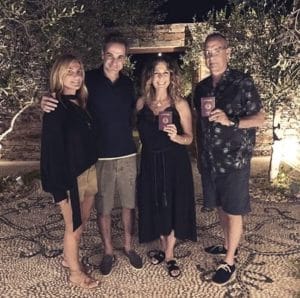 The Greek Prime Minister Kyriakos Mitsotakis and his wife Mareva  welcoming Tom Hanks and his wife Rita Wilson who recently arrived at their summer home in Antiparos island.

Mr. Mitsotakis posted this photo on his Instagram with the caption:

Notably, Tom and Rita  proudly holding their Greek passports, which they recently acquired with their Greek citizenship and are dual citizens of U.S. and Greece.