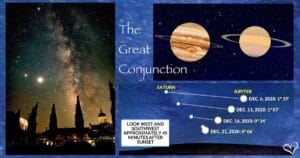 The Lords of heaven, Jupiter and Saturn in the Great Conjunction

On December 21, 2020, there will be a Great Conjunction of Jupiter and Saturn as the two planets will lie very close to each other just 0.06 degrees apart. The two giant planets are converging for a close encounter the likes of which have not been seen since the Middle Ages, precisely since 1623, just 15 years since the first time a man on our planet turned a telescope in the sky [1] .

The Lords of heaven, Jupiter and Saturn as seen over Mount Athos, Greece [Photo by Constantine Emmanouilidi]

The giant planets Jupiter and Saturn seen bright above the little house of the Russian monastery on Mount Athos, Greece, captured by Constantine Emmanouilidi.
The two planets getting closer and closer and will perceived as a single brilliant star in the sky. Viewed through binoculars or a small telescope, ringed Saturn will appear as close to Jupiter as some of Jupiter’s moons. This is close enough that many telescopes may be able to see both planets at once in the same field of view! Although Great Conjunctions between Jupiter and Saturn occur every twenty years, they’re not all easy to see. Often the two planets are hidden in the glare of the sun. This year is special because the conjunction happens comfortably away from the sun. In fact, the last time the two worlds were so close together *and* so easy to see was the year 1226, astronomer Michael Brown told the “Washington Post.”
Keep in mind that while the two gas giants may appear close, in reality they are hundreds of millions of miles apart. This will still be quite a striking sight, but you will need to look fast as both planets will set shortly after sunset. Look above the western horizon after sunset for these bright, close planets- a clear view will help! 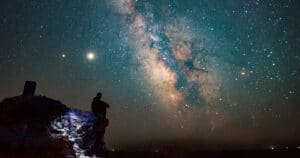 Hanging out with the Giants! It is said that once you learn about the constellations in the sky, you will always have friends anywhere you go in the planet. Imagine now being with the giants planets Saturn and Jupiter, under the same sky enjoying the view of the MilkyWay! – Constantine Emmanouilidi 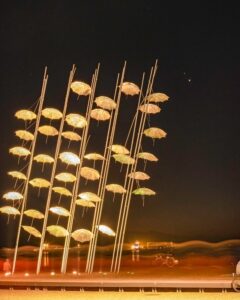 [1] The first record of a telescope comes from the Netherlands in 1608. It is in a patent filed by Middelburg spectacle-maker Hans Lippershey with the States General of the Netherlands on 2 October 1608 for his instrument “for seeing things far away as if they were nearby”.
Credits:
Photos by: Constantine Emmanouilidi, Dates by Meteorologist Jacob Dickey, Collage by IAmGreece.org
Reference: NASA Jet Propulsion Laboratory