The Hellenic Society for the Protection of Nature (EEPF), National Operator of the International Program “Blue Flag” in our country, announced the awards for coasts, marinas and tourist boats.

With 581 award-winning beaches, Greece again holds the 2nd place in the world among 53 countries. It is worth noting that, for the first time, the awards exceed 600, and that in the total of 53 countries participating in the Program, Greece holds 14% of the awarded coasts. The prefecture of Halkidiki was the first in Greece in the number of total awards, with 96 flags. The International Commission awarded 4,194 beaches, 732 marinas and 116 tourist boats worldwide.

This year, the “Blue Flag”, the most recognizable ecological quality mark for beaches, marinas and sustainable tourism boats, completes 35 years of application in the world and in Greece.

The Hellenic Society for the Protection of Nature (EEPF), National Operator of the International Program “Blue Flag” in our country, announced the awards of coasts, marinas and tourist boats. Greece ranks 2nd in the world among 47 countries with 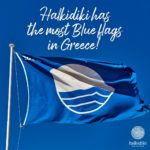 Beloved Halkidiki region collected the most Blue Flags in Greece with 107.

It is worth noting that this year, in all 47 countries participating in the Program, Greece owned 13% of the total awarded coasts. The first in Greece was again this year, the Regional Unit of Halkidiki, with 94 flags. The International Commission has awarded 3,895 beaches, 691 marinas and 82 tourist boats worldwide this year.

Year 2019 – Greece moved up to the 2nd place in World for Blue Flag-Awards. A total of 534 Blue Flags were awarded to Greek beaches, marinas and sustainable tourism boating operations this year. (Spain top the list with 566 Blue Flag beaches). 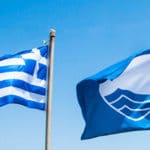 The Blue Flag is one of the most respected eco-labels there is. This year, a total of 3,797 beaches, 695 marinas and 67 tourism boats in 47 countries were awarded with flags. The iconic Blue Flag raised on locations, is a world-renowned and most recognised voluntary eco-label, awarded to beaches, marinas, and sustainable boating tourism operators. It is the symbol of trust by tourists and visitors around the globe. The program is operated under the auspices of the Foundation for Environmental Education (FEE) and is headquartered in Copenhagen, Denmark. In Greece, the program’s coordinator is the EEPF.

While the new flags are being raised all around Greece (see map here), some areas stand out. Halkidiki peninsula in northern Greece is the single regional unit with the most flags. You’ll see as many as 89 Blue Flags floating in the wind at beaches and marinas of this northern region of Greece. Among the Greek islands, Crete holds the most flags, with 115 beaches and 1 marina awarded, most of them in the Lasithi and the Hania regional units. Rhodes was also near the top of the list with 39 awarded beaches.

The Blue Flag is a certification by the Foundation for Environmental Education (FEE) that a beach, marina, or sustainable boating tourism operator meets its stringent standards for environmental, educational, safety, and accessibility criteria. The Blue Flags are not only awarded for the cleanliness of bathing waters but require many other criteria be met, including the presence of services such as restrooms, first aid equipment and much more. As such they are only awarded to organized beaches typically managed by a dedicated operator, not empty and isolated stretches. 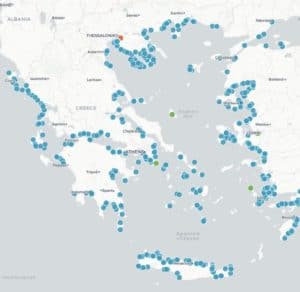