By Konstantinos A. Markakis 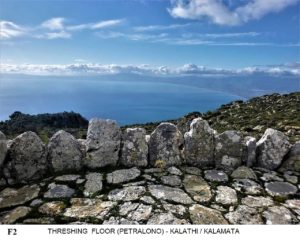 Verga is a village situated the entrance gate to the Messinian or Outer (Exo) Mani, on the western slope of Mount Kalathi – part of the Taygetus Mountain Range. Today, Verga belongs to the Municipality of Kalamata, Messinia and ecclesiastically to the Metropolis of Gytheion, Laconia. The community comprises three settlements: Ano Verga ( formerly Selitsa or Apano Selitsa, average altitude 850 m), Kato Verga (formerly Selitsanika or Cato Selitsa, 300 m) and Paralia Verga (50 m).
For hundreds of years Selitsa was connected through a historic paved road (kalderimi = kalos dromos = good road) with Mt Taygetos’ network of paths in the east and with Kalamata in the west. The kalderimi beautifully wanders through the slopes of the mountain, with an impressive view of the Messinian Bay. The paved floor consists of stones of various sizes “planted” in the ground without binding material and is usually flanked on both sides by dry stone walls serving also as boundaries of the communal road with farmer’s and livestock owner’s properties. There are some rocky sections of the road, where the natural stones serve as a paved floor, having been smoothed out, as well as horizontal sections without paving, simply with a layer of “pressed” gravel and soil (terra battuta).

The main old branch of the road extends 3 km from Paralia – via Kato Verga – to Ano Verga, while the whole road (including several parallel branches) to Aghios Georgios at 1340 m reaches 10 km. Near this road, there are some traditional threshing floors (Petralona) preserved in the farms, 10-15 at Kato Verga and about 20 in Ano Verga (over 100 in total before 1950).
It is not by coincidence that the Kalderimi has been built along a “stream of fountains” and the “Robola ravine”. It is obvious that water was the main reason for the construction of this road next to stream and ravine. For hundreds of years, this stone-paved road served for grazing and watering some thousands of sheep and goats and several cattle. It was also used by mule-owners transferring timber, vegetables, livestock, and other agricultural products to Kalamata, as well as olive oil, olives, oak acorns, tanning agents, prinokoki (crimson-colored dye) etc to merchant ships in Port of Almyros. Returning to Selitsa they transferred local products from Kalamata and imported goods from Almyros.

Selitsa/Sellyza is referred by many foreign travelers about 1800 AD (e.g. William Martin Leake [1], Sir William Gell [2], Francois Pouqueville [3]) and in old maps and texts (from 1700 – 1800 AD). From the historical research on the village of Selitsa, made by the “Friends of Verga” (Non Profit Organization), based on the work of well-known historians and researchers such as : Vassilis Panagiotopoulos [4] (Venetian Censuses of 1700 AD), Yannis Saitas [5] (Maps of the French Scientific Mission in the Morea – Atlas of Bory de Saint Vincent 1835 AD), Malcolm Wagstaff & Stella Crysochoou – Stavridou [6]as well as Olga Katsiardi-Hering [7] (Venetian Maps from 1707 AD), Elias Moundreas (book of Jean Lognon – Peter Topping [8]in 1969, referring to Armiro & Calidia (Selitsanika Calivia), as properties of Catherine de Valois 1307-1346 AD), Athanasios Karathanasis, Stavros Kapetanakis [9](Maniates at Greek Revolution of 1821), Agathoklis Panagoulias (Censuses 1700 to recently), Maria Theochari – Petroulea (old Temples in Selitsa), it follows that this path was connecting Selitsa with Kalamata at least between 1300 and 1800 AD.

According to the above historical research, the settlement of “Cato Selitsa” (now Kato Verga) developed after 1835 AD at the place of “Selitsanika Calivia”, after the defeat and retreat of Ibrahim Pasha from Messinia. Selitsanika Calivia were rough seasonal huts of Selitsa’s shepherds, behind the rock “Kastraki”, near “Armiros”. Cato Selitsa became a village with the descent of more inhabitants from the older settlement (Apano Selitsa) during the reign of King Otto (1832 – 1862 AD). During those years additional stone-paved paths were built, both outside the new village, serving the agricultural and livestock activities, as well as within it for the residents themselves.

The renaming of Selitsa to Verga took place in 1956, in memory of the historical “Battle of Verga – Almyros” (1826) and the victory of the rebellious Greeks on the Turkish-Egyptians of Ibrahim Pasha. The “verga” was a defensive stone wall 1000 m long – 2 m high with about 1000 firegun openings, resembling a tree branch (=verga) as seen from above. It was built in 1826 on the south bank of a deep stream, extending from Almyros beach to the peak of the rock “Kastraki”. 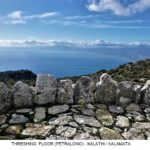 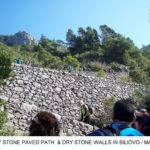 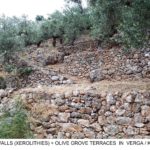 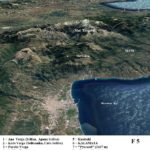 W. Gell – Narative of a journey in the Morea 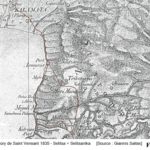 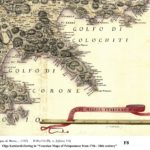 Following the request and documentation of the NPO “Friends of Verga”, supported by many local Residents’ Associations, the Hellenic Ministry of Culture acknowledged the following dry stone constructions in Verga as “Monuments of Cultural Heritage” :
three (3) Kalderimia (3 km), ten (10) Petralona and one (1) Fountain (Vrissi) in 2015 the Kalderimia from Kato to Apano Verga and to Mount “Kalathi” (7 km) in 2018.
A traditional olive-oil mill and the stone-built cisterns of the “Alexandrakis aqueduct” (1873 – 1900) have also been proposed for characterization.
As Monuments in Verga have also been acknowledged: the Chapels Agios Konstantinos, Agia Paraskevi, and Agios Spyridon the historic “Xerolithia of Verga”, where Ibrahim was defeated in 1826.

It is noteworthy that the rock “Kastraki” in Kato Verga, which was used as a natural watchtower before 1821, has a long history : Indeed, Richard Hope Simpson’s article “The seven cities offered by Agamemnon to Achilles” [10](The Annual of the British School at Athens, Vol. 61, 1966, pp. 114 and 116) states that in his 1950s field investigations on Kastraki “The west slopes, overlooking the sea, are covered in grain terraces, and on these, within an area about a hundred meters in diameter, Mycenaean sherds are abundant. These include fragments from long-stemmed Kylikes, Deep Bowls, and Pithoi (the latter of ‘oatmeal’ ware), and handles from Jars similar to those found at Margeli, in reddish or orange fabric.”
The above is confirmed in a recent memo by the archaeologist Professor Petros Themelis (restorer of Ancient Messini): “Residues of a Mycenaean settlement were found on a terrace north of Verga. Mycenaean sherds were also found on the western slope of the rock “Kastraki”, in today’s Kato Verga”.

UTILISING THE PATH NETWORK OF TAYGETOS AND REVIVING THE ABANDONED MOUNTAIN SETTLEMENTS
The acknowledgment of the traditional dry stone-paved paths of Verga as monuments of cultural heritage protects these old roads from damages or trespassing, through the provisions of the “archaeological” Law 3028/2002, ensuring their historical – geographical and operational continuity, from the beach of Kalamata up to Agios Georgios on Mount Kalathi (1340 m altitude).
From this location, the whole network of mountain paths of Taygetos is accessible, from the villages of Alagonia in the north to Cape Tainaro (Cavo Matapan) in the south, and from Verga (Selitsa) in the west to the Byzantine castle town Mystras in the east, as well as to the summit of mount Taygetus at 2400 m altitude.
In other words, a complex “Taygetus – Mani Trail” about 100 km long makes multi-day excursions of nature lovers – hikers possible, with stopovers and overnight stays in beautiful mountainous settlements, partly abandoned nowadays. This would be a powerful incentive for the return of the residents and the re-opening of cafe-bars, restaurants, and accommodation, contributing to the revival of traditional mountainous settlements.
A relative proposal of the NPO “Friends of Verga” found an eager and friendly response from:
the School of Rural and Surveying Engineering of the National Technical University of Athens, for the development of a web-based cartographic application of the Taygetus paths, utilizing the synergy of volunteer hikers to send data (photos with coordinates) to a central server (Crowdsourcing), initially student-operated and then transferred to Municipal offices
the School of Architecture of the National Technical University of Athens, for the architectural mapping of important buildings & monuments in mountainous settlements and their environment by students, and their integration into the above cartographic application
the Department of History, Archeology and Cultural Resources Management of the University of Peloponnese in Kalamata, for supplementing the above database with historical documentation of monuments and settlements by its students
the Hellenic Society for the Environment and Cultural Heritage, for the inclusion of this path-network in the “Paths of Culture” and for cooperation in a program for the repair of damages – route marking – awareness of residents.
The above initiative could be utilized in thematic tourism programs (e.g. “Hiking in History of Taygetus and Mani”), in multimedia applications for tourists and investors etc., from the Municipalities of Kalamata, Sparta, Western & Eastern Mani and the Region of Peloponnese, for a sustainable and environmentally friendly development of Messinia and Laconia regions.

DAMAGE AND TRESPASSING OF PUBLIC MONUMENTS

Unfortunately, despite the support of the local community for the rescue of traditional dry stone monuments, some local contractors – engineers have systematically damaged and trespassed the above mentioned Kalderimia. Then, they questioned the communal character of the old path, trying to occupy parts of it and incorporate them into small adjacent parcels they acquired, as if they were parts of their new properties.
Active citizens and especially the NPO “Friends of Verga” faced these claims by intervening in the Administration (Urban Planning, Local Government, Decentralized Administration, Ministry of Environment, etc.), as well as in Independent Authorities (Ombudsman, General Inspector of Public Administration), so far successfully.
Those citizens, who defended the ancient monuments, their communal character, and their public ownership, have been falsely denounced by the mentioned trespassers and brought to criminal and administrative courts, facing lengthy and costly litigations for six (6) years. Thanks to the completeness of their documentation the accused citizens have been declared innocent in the criminal courts and won the case in the administrative courts.
Unfortunately, the Municipal Authority of Kalamata systematically refuses to proceed with administrative expulsion of the trespassers and restoration of the damaged monuments, ignoring decisions of the Ministry of Culture, of the Criminal & Administrative Courts, the suggestions of the Ombudsman etc. But the efforts of “The friends of Verga” are ongoing.

The current Text & Images is a Summary of the Presentations at :