🇬🇧 When you are being there, in the middle of these ancient olive tree groves, you “live” what you see. It is quite an experience  seeing these very old trees, and makes you wonder how many people these olive trees have fed for 2000 years!

The olive tree has a special significance to the Greeks since the antiquity and it’s  considered as a gift of the Gods to the Greeks. According to Mythology, Goddess Athena planted the first olive tree on the Acropolis. Thus the city Athena (Athens) got the name from Goddess Athena, the Goddess of wisdom and courage, who also was the protector of the ancient city. From the ancient times, the olive oil was the main staple in Greek households and every day life, from cooking, to lighting of their homes, temples and churches, to making soaps, perfumes and all kinds of special and elegant containers to hold the oil.

Olive tree is something sacred and its branch is the symbol of peace. The prize awarded to Olympic athletes also it was a wreath made of olive tree branches cut from the sacred wild-olive tree near the temple of Zeus in Olympia.

A few years ago I had the privilege to walk around the old olive tree groves located at the outskirts of Paralio Astros and between the town of Astros Kynourias. I was there just by coincidence while trying to locate some olive trees (ριζες ελιές) that belonged to family, which were passed down for generations. Through research at the town registry, we knew of the general location so we were just trying to locate the Olive trees that belonged to us. I had no idea what was about to witness, but as we were getting deeper into the grove, I realized that the trees were extremely old. I started looking at the trunks and their majestic natural beauty, evident that had gone through an extremely long life. I was in awe and started taking pictures you see in the gallery below. 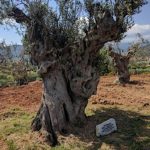 Today, many of these thousands years old trees have been transplanted in a newly created Olive Tree Theme Park. The effort to create an outdoor Olive Tree Theme Park was started by students and teachers of Astros Vocational High School (ΕΠΑ.Λ), and the project was materialized with the help of the Municipality of North Kynouria, and with the support of the Paleopanagia Monastery, which donated an area of ​​two and a half adjacent to the school.

On March 2018, under the title “The Olive Trees of the Thyrea”, the first 1800 year old olive tree was transplanted. Work continued with the relocation of about 30 old olive trees from the original groves to the Park. Finally, on April 2019, the inauguration of the Olive Theme Park took place. These very old olive trees are truly natural monuments and wonders of nature that give a unique and deep emotional feel to every visitor.

Historically, the Astros and the Thyrea area has always been fertile land with olive groves and vineyards. This was the reason for the many conflicts and wars in antiquity between the neighboring city-states of Argos and Sparta. The climax in fighting for this land was the legendary Battle of the 300 Champions in 546 BC. Argos and Sparta, to reduce men casualties of a full battle, each pitted 300 men to battle  with  the winner taking ownership of the territory. The battle was indecisive with 299 Spartan and 298 Argives dead. The survived Spartan Othryades and Argives Alcenor and Chromius, went through an event that prompted both sides to claimed victory.

The Pausanias traveler, in 155 AD writes about these olive trees of the Thyrea: “Bypassing Anigraia road, narrow and otherwise almost inaccessible, on the left I was by the seas and trees, especially olive trees, in a good nourishing land”, [Pausanias, Corinthians ΙΙ.38,4.].

Today, 2,000 years later, many of the countless very old olive trees on the plains of Thyrea not only offer admiration to every visitor, but they still continue to give us olives and produce their unique olive oil.

The Olive Tree Theme Park, in addition to the old olive trees, includes various related items presented as exhibits, which include:

The Olive Tree Theme Park in Astros Kynouria is truly a unique place worth a visit.

View of the Thyrea plains from the Castle in Paralio Astros