Freerunning on the Rooftops of Santorini

The top freerunners in the world competed in Santorini, Greece, the so-called freerunning paradise, for Red Bull Art of Motion. Set against the volcanic landscape and the breathtaking Aegean Sea, 18 freerunners put together some incredible runs, flipping and twisting their way across the village

Dimitris Kyrsanidis (DK) from Greece, won the 2014 and 2015 competitions of Red Bull Art of Motion in Santorini and brought him worldwide fame catapulting him into the freerunning elite. 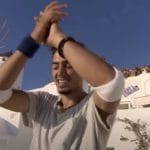 DK was inspired to become a parkour athlete after he decided he wanted to do something extraordinary, something different from the stuff he did every day.

He first started freerunning when he was 12 years old with his friends from his neighborhood in Thessaloniki, Greece. He believed that football, basketball, volleyball and all the other sports in the media were too ordinary, too casual for him. He was impressed by the jumps, rolls and flips involved in parkour.

For Dimitris, freerunning is not just a hobby, it’s his life. “I do my training every day like people eat dinner every day,” he says. “I do it not because I have to, but because freerunning is my life.”