Open Air Museum of Water Movement, Dimitsana Arkadias, Peloponnese
Dimitsana is one of the more beautiful and historical villages of Greece. There, up in the mountain slopes at elevation of 950m located the Open Air Museum of Water Movement, which highlights the importance of water’s uses in traditional society. It houses a flour mill, a rakokazano, a tannery and gunpowder mill. 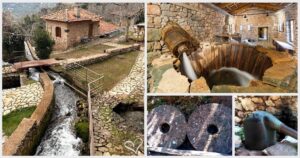 During the Greek War of Independence in 1821 Dimitsana played an important role with its gunpowder mills.  The people of Dimitsana supplied the revolution the necessary war material for the liberation of the country from the Ottoman empire, working day and night, supplying the fighters with gunpowder from the 14 gunpowder mills. For this reason Dimitsana has been called “the Nation’s powder keg”.
Characteristically, the revolution’s Major General Kolokotronis writes characteristically: “We had gunpowder, Dimitsana did it”.