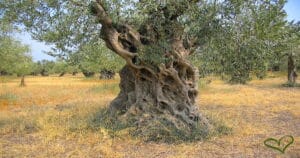 The olive tree has a special significance to the Greeks since the antiquity and it’s  considered as a gift of the Gods to the Greeks. According to Mythology, Goddess Athena planted the first olive tree on the Acropolis. Thus the city Athena (Athens) got the name from Goddess Athena, the Goddess of wisdom and courage, who also was the protector of the ancient city.

Groves of ancient olive trees are near Astros Peloponnese, where recently an Olive Tree Theme Park was created.

From the ancient times, the olive oil was the main staple in Greek households and everyday life, from cooking, to lighting of their homes, temples and churches, to making soaps, perfumes and all kinds of special and elegant containers to hold the oil.

There are many Olive trees in Greece that they are thousands of years old.  An olive tree in the village of Ano Vouves in the municipal unit of Kolymvari near Chania, Crete, is probably one of the oldest olive trees in the world, and it still produces olives today. The exact age of the tree cannot be determined. 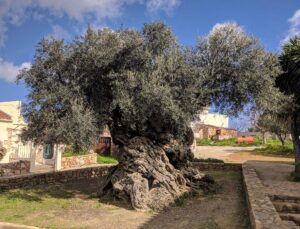 Olive tree is something sacred and its branch is the symbol of peace. The prize awarded to Olympic athletes also it was a wreath made of olive tree branches cut from the sacred wild-olive tree near the temple of Zeus in Olympia.

The Olive Tree World Day dedication was proclaimed at the 40th session of the UNESCO General Conference in 2019 and takes place on 26 November every year.