Giannis have repeatedly shown respect, family appreciation, kindness, hard work and love for his country. All these are the ingredients for a great humble person. Greece and all greeks are very proud of him.

True MVP off and on the court, we have the utmost respect for him. He let go of himself and cry in front of a crowd shows his great personality of a loving and gentle man.

Congratulations Gianni. You deserve every bit of the honor.

See also Gianni as he meets hundreds of Greeks after a game with Cleveland, and signs with the fans the Greek National Anthem! 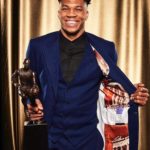 How more Greek one can be?

Giannis Antetokounmpo made all of Greece proud by flashing the inside lining of his suit jacket after being named MVP, during the league’s awards show on Monday night.

The “Greek Freak” had a depiction of the Parthenon on the lining of his trendy navy blue jacket. He proudly posed for the cameras to show the historic monument of Athens, the great city in which he was born and grew up.

Γιάννης Αντετοκούνμπο, born December 6, 1994, is a Greek professional basketball player for the Milwaukee Bucks of the National Basketball Association (NBA). Although nearly 7 feet tall, Antetokounmpo possesses the “ball-handling skills of a point guard and the battering ram force of an old school center, giving rise to his nickname the “Greek Freak” [Wikipedia]