See also International Greek Language Day | Give me a word, any word… 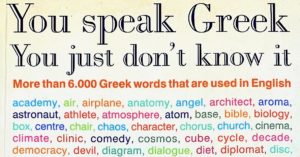 You speak Greek – You just don’t know it

The Greek language is one of the richest languages in the world, distinguished by an extensive vocabulary.  Thousands of these words have been widely borrowed into the English and other languages.

Overall, according to a research conducted by Mr. Aristidis Konstantinidis [1], the English language and international scientific terminology contain more than 150,000 Greek words. In the Merriam Webster American dictionary alone, there is a total of 166,724 words, from which the share in pure Greek words is 42,914. That, that is 25.73% – one in four of the words are purely Greek. In medical terminology the ratio is even more impressive, where out of 43,716 words, 20,346 are Greek. That is almost 50% derive from the Greek language. Of course there are the mathematics and scientific terminology for which their major part is based on Greek, thanks to our brilliant ancestors.

A book by Annie Stefanides [2] was published in April of 2010, which identifies over 6,000 Greek words that are used today in English. It is a comprehensive collection of Greek words, prefixes and suffixes in the English language. A good way to start looking and learning some Greek and where the words are coming from. 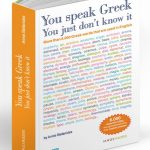 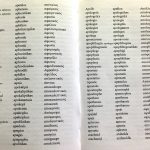