The Jockey of Artemision 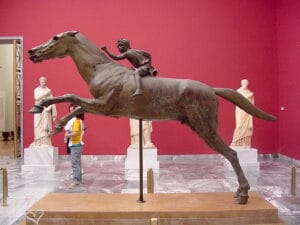 Bronze statue of a horse and a small rider, from the sea near Cape Artemision of Evia Around 140 BC is displayed at the National Archaeological Museum in Athens.

It was excavated in 1928 and 1937 in parts of the sea area of Cape Artemisio in northern Evia. It is a rare example in Greek bronze sculpture of a racehorse. This extraordinary work is known as the Jockey of Artemision, was curated during the Hellenistic Period, lifesize dimensions with height of 2.10m. Goddess Nike is engraved on the horse’s right thigh, holding a wreath in raised hands — a brand for racehorses in Ancient Greece. 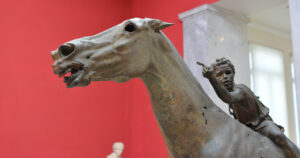 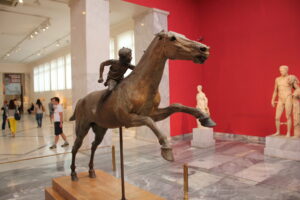 Most ancient bronzes were melted down for their raw materials some time after creation, but this one was saved from destruction when it was lost in a shipwreck in antiquity, before being discovered in the twentieth century. It may have been dedicated to the gods by a wealthy person to honour victories in horse races, probably in the single-horse race (Greek: κέλης). The artist is unknown.

The era of Hellenic (Greek) antiquity is divided in four periods, with the beginning of each approximates to: Archaic 700 BC, Classical 500 BC, Hellenistic 300 BC, Roman 100 BC to 500 AD.