Greek (use toolbar to return to English original)

With the COVID-19 Coronavirus pandemic, medical experts advising us to stop the handshake! But for how long we have to endure not touching other people, friends and relatives?

The earlier representations of the Dexiosis[1], handshake, dates back as far as the 5th century BC in Ancient Greece. The Greeks called it Dexiosis, roughly meaning “engagement of the right hand.” Dexiosis was practiced in ancient Greece, rather than bowing or curtseying, demonstrating that both parties were equals, they hold no weapons, and that they felt ease in each other’s presence.

The classical archeologist Janet Burnett Grossman, in her article “Funerary Sculpture,” published in The Athenian Agora, defines dexiosis as a “gesture symbolizing connectedness,” which isn’t too different from today.

Hospitality scene, from the Collection of Greek Vases [DeAgostini/Getty Images]

Many dexiosis instances are depicted on on graves, stelae[2] and vases signify everything from marriage to peace between warring cities.   Most often, the motif was associated with funerary art of the Classical Athens and often show mortals and gods communing through a handshake.

On funerary monuments the deceased were depicted in the circle of their families. The deceased, usually sitting or sometimes standing, clasping the hand of a standing survivor, often the spouse. In this context, this solemn gesture represented a farewell, which reflected the ideals of contemporary society. Particularly notable is the contrast between the public character of the funerary monument and the private nature of the depiction. 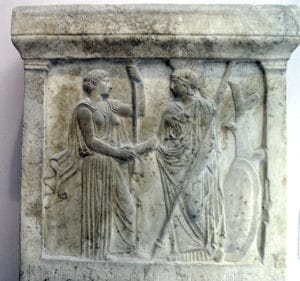 As many of the Greek words, there is a deep meaning of Dexiosis, and not merely a compositional element connecting two people. As Mgr. Lucia NOVÁKOVÁ, Mgr. Monika PAGÁČOVÁ [3] note: “Its meaning should be perceived in terms of both the intimate gesture expressing emotions and the formal presentation of the family. Dexiosis emphasized a permanent bond as the fundamental element of the family in particular, and society in general. At the same time, it was associated with the theme of farewell. The gesture was performed by two people in a dialogical composition, which clearly showed their mutual relationship and the figures were depicted in various compositions regardless of their gender or age.”

A relief of a Dexiosis between Arsameia, Mithridates or Antiochus I, with Hercules [Wikipedia] 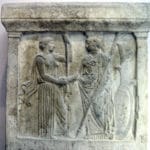 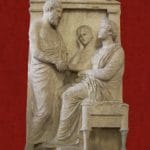 Sculpture on the gravestone of Agathon and Sosykrates. [Wikimedia]

Hospitality scene, from the Collection of Greek Vases [DeAgostini/Getty Images] 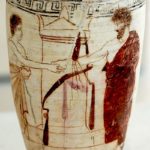 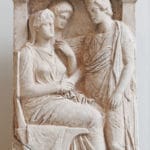 [1] Dexiosis: (Greek δεξίωσις dexiōsis, ‘greeting’ to δεξιόομαι dexioomai‚ ‘to give (someone) the right (hand)’ δεξιός, dexios ‘right’, Latin dextrarum iunctio‚ ‘joining together of the right hands’), in the fine arts, is the representation of two people offering each other their right hand. [2] Stele: (Greek: “shaft” or “pillar”), plural stelae, standing stone slab used in the ancient world primarily as a grave marker but also for dedication, commemoration, and demarcation. [3] Dexiosis: A meaningful gesture of the Classical antiquity (PDF)
Translate »