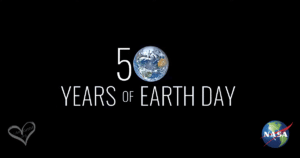 NASA has launched an #EarthDayAtHome campaign to help the public celebrate the Earth Day’s 50th anniversary around the world celebrated the first Earth Day (April 22, 1970). 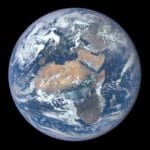 I was one of the lucky ones having the opportunity working at NASA Goddard Space Flight Center (GSFC). NASA GSFC has combined a variety of educational resources into a 50th anniversary toolkit, which is designed to get conservation messages across to young people — and the rest of us as well with various planned activities specifically to raise environmental awareness movement.

“Amid the recent outbreak, we encourage people to rise up but to do so safely and responsibly – in many cases, that means sing our voices to drive action online rather than in person,” Kathleen Rogers, president of Earth Day Network, said in a news release.

A NASA camera aboard the Deep Space Climate Observatory satellite caught this view of Africa and the entire sunlit side of Earth on July 9, 2015. NASA released the image July 29.
(Image: © NASA)

NASA Looks Back at 50 Years of Earth Day

It’s been five decades since Apollo 8 astronaut William Anders photographed Earth peaking over the Moon’s horizon. The iconic image, dubbed Earthrise, inspired a new appreciation of the fragility of our place in the universe. Two years later, Earth Day was born to honor our home planet. As the world prepares to commemorate the 50th anniversary of Earth Day, NASA reflects on how the continued growth of its fleet of Earth-observing satellites has sharpened our view of the planet’s climate, atmosphere, land, polar regions and oceans.