Greece launches Gr-Eco Islands Initiative, with €100 mlllion budget, on the island of Halki. 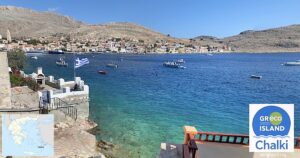 Halki (Χάλκη – Chalki) is a small Greek island in the Dodecanese archipelago in the Aegean Sea, about 9 km (6 mi) west of Rhodes. The island remains untouched by mass tourism but is a prime destination for relaxation and very close to cosmopolitan island of Rhodes for daily excursions. 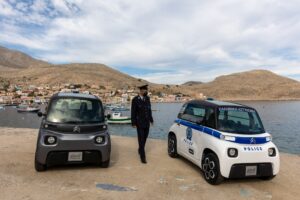 A policeman between two Citroen Ami electric vehicles donated to Greek Police and Coast Guard on the island of Halki, Greece, on Nov. 5. [ Photographer: Yorgos Karahalis ]

Greece inaugurated the local community energy project and also launched its Gr-Eco Islands Initiative, which aims to green the country’s islands. Starting small with Halki, which has only 592 electricity customers, will set the stage for the larger islands.The green energy community project, comprising an 1 MW solar PV farm, electric vehicles, solar powered boat and a 5G telecommunications network. The pilot project is looking to foster clean and energy independent communities, which include various Internet of Things (IoT) hardware and software in an attempt to link the islands’ public institutions to mainland Greece and the world. 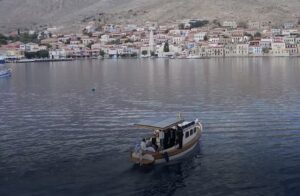 An addition to the project initially announced in July is a solar-powered boat, which was designed and built by a Greek family enterprise in the nearby island of Patmos. The electric boat will offer excursions around Halki, providing an ecotourism element to the project.

The inauguration included the delivery of six electric vehicles, donated to the Dodecanese island by Citroen and ALD Automotive, and the electric boat from tobacco industry Papastratos.

Halki is the first in its GR-eco Islands initiative slated for the energy transition, as the government is setting up an Island Decarbonization Fund to see the insular part of the country shift from carbon-based power to renewable energy sources and improve its environmental footprint.