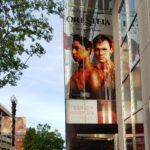 Last night Carla and I attended a ‘free adaptation’ of Aeschylus’ great “The Oresteia” trilogy (458 B.C.E.), performed by the Shakespeare Theatre Company of Washington, D.C. Why the ‘free adaptation’? Because (I imagine they think) modern audiences would not appreciate Aeschylus’ plays. In adapting Aeschylus, Ellen McLaughlin eliminated the Greek gods and in the part corresponding to the third play, “Eumenides,” replaced the establishment of the Athenian jury trial with a sort of reconciliation process (such as that used in Rwanda or the Union of South Africa), conducted by the chorus and Orestes and Electra–a sea change; and she added other scenes throughout. While I laud the attempt to say something useful for our addressing our current problems (e.g., Trump, the Middle East), and while the acting and staging were first rate, most of all I grieve the loss of Aeschylus’ magnificent words, and I shudder at the hubris of persons who think they can improve on Aeschylus or Shakespeare.